Just getting the chance to compete at the JEGS AllStars event was enough to make just heading to Indy a bucket list item for Allen Firestone.

But considering what he had been through to get to the U.S. Nationals this weekend and what followed on Friday, it became even more significant.

Firestone hit the wall on the top end in the final round of his Top Sportsman event victory at the NHRA regional event in Topeka in late July, putting a momentary stop on his impressive 2020 season.

But Rick Jones and RJ Race Cars had his Patterson/Elite-powered Camaro fixed in a week and Firestone hasn’t skipped a beat. His car was as good as ever in his first-ever trip to the Big Go on Friday, winning the prestigious JEGS AllStars in Top Sportsman thanks to a run of 6.561-seconds at 210.73 mph in the final round. It caps off a wild roller-coaster of emotions in the past six weeks, one that ended with one of the biggest moments in Firestone’s career.

“It’s just unbelievable. Even if we hadn’t went through the crash and did what we did here, it’s just been a privilege to make the AllStars event, let alone win it,” Firestone said. “To win this deal, it’s just the best of the best you’re against, and it was very emotional to close it out like we did.

“It’s kind of like a Cinderella story for me, an old man like me who has done this for years and years, and to win that deal, it’s just great. I’m on cloud nine right now.”

Firestone was riding high on Saturday, taking a minute to reminisce about reaching this moment after a wild 2020 season on and off the track.

With racing interrupted during the COVID-19 pandemic, the NHRA Division 5 Top Sportsman champ was ready to go when racing resumed.

He won in Topeka, but the car got into the wall in the shutdown area during the final round, putting a bittersweet element into the winning weekend.

But Jones and his talented team at RJ Race Cars went to work quickly on Firestone’s Camaro and the longtime customer again came away impressed. 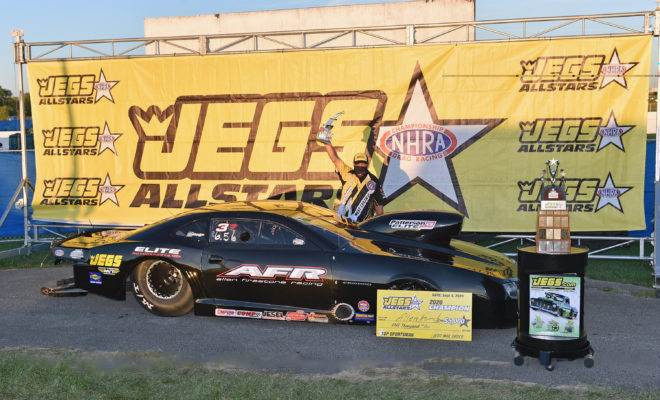 Rick was calling me by the time I was out of the car,” Firestone said. “They went through it and I could just tell it was going to be better. I knew what happened in Topeka was kind of a freak deal and it was kind of a bummer, but they just jumped on it and got it all finished.

“We went and tested and it seemed even better than it was before. It put us right back where we were. I’m just so comfortable in this car.”

That has been the case all year for Firestone, but he had zero concerns following the crash.

He put his faith in Jones and his Patterson/Elite engine, and the results since Topeka have been just as strong.

In fact, it took just a couple runs on Thursday for Firestone to feel confident he could compete for the JEGS AllStars win the next day.

“After those runs on Thursday, it felt just like it did when I was winning rounds,” Firestone said. “It was right back to normal. I went (6.368) and it was as straight as a strong. The car has been great, I’ve been driving good and we’re really in a good place.”

With a 6.56 dial-in for the championship round, Firestone was nearly flawless when it counted. He was .014 on the starting line and 6.561 at the finish line, setting off an emotional celebration and leading Firestone to thank his Elite team.

“Since me and Royce (Freeman) started racing together and being part of the Elite team, it’s just changed the whole outlook on the way I do things. It’s made me a perfectionist and it’s made me a lot better racer.

“It’s really upped my racing program. I feel like there’s nobody I can’t beat and if we’re at a race, we’re there to win it. I feel like I’ve got a car and a team and a motor program to do it. I don’t have any problems with my motors and it makes a huge difference when all you have to do is concentrate on the tree.”

Firestone called it a really great couple of years, one that includes a championship a year ago and two divisional victories thus far in 2020. Friday’s special moment added to it, giving Firestone a U.S. Nationals memory for the ages.

“Just to race here is an honor in itself,” Firestone said. “It’s just a different atmosphere, and it’s just been a fantastic deal. It’s been a great year on the track and this was just a dream come true.”