Greg Anderson was the No. 1 qualifier. He was the quickest car through all four rounds of eliminations. And he had all the motivation in the world, sitting one win shy of tying Warren Johnson atop the all-time Pro Stock win list. 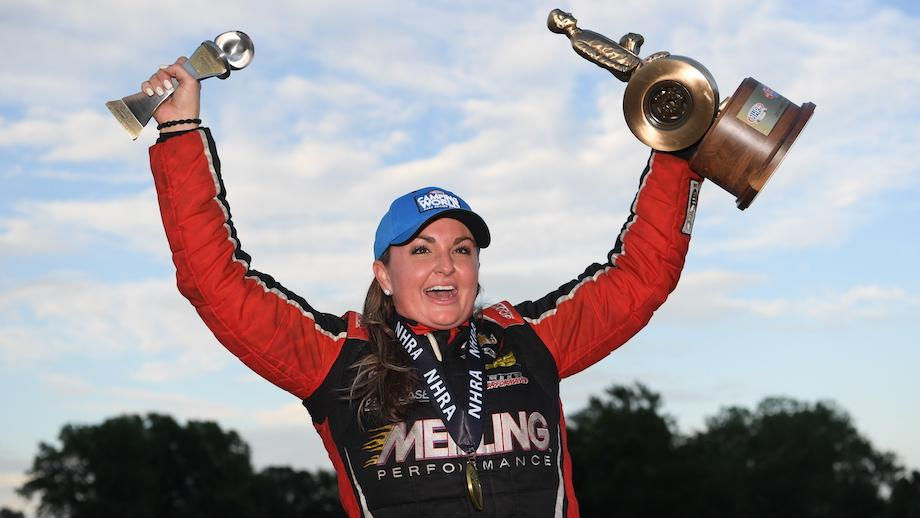 In a classic matchup between two of the best drivers in the history of the Pro Stock category, Enders did what she does best with a lightning-quick reaction time to beat Anderson on a holeshot and prevent him tying Johnson’s mark at the Summit Racing Equipment NHRA Nationals. With the win, Enders earned her second Wally of the year and her first at Summit Motorsports Park since 2014.

“I wanted that one bad,” an elated Enders said moments after climbing from her car. “It was so killer to go against our arch-nemesis and one of the baddest dudes Pro Stock has ever seen. He is gunning for his 100th win, trying to rack them up to beat Warren Johnson. To be able to go out there and run with him and turn the beacon on is huge for me.”

Enders flew under the radar most of the afternoon, recording relatively easy victories from the No. 3 spot on the ladder en route to meeting Anderson for the 40th time in their storied careers. Enders, like her fellow competitors, also had to deal with numerous delays brought about by persistent afternoon showers that bombarded the Norwalk, Ohio, based racing facility.

Roughly three hours after the final round was originally scheduled to take place, Enders met up with Anderson on a green racetrack and the two went to work.

Enders posted an incredible .005 reaction time in her RJ Race Cars built Camaro for Elite Motorsports, getting every tick of performance out of the car to claim a holeshot victory with a 6.606-second pass at 205.44 mph.

Anderson crossed the stripe with a quicker and faster 6.594 at 206.20 mph in his Camaro - his best elapsed time of the entire weekend - but it was not enough to overcome his opponent.

“I knew I could be 10 up there and I was a five. I tried to put everything out of my head with the rain delay. I knew we were going to have a great track, so I am doing the math in my head and I know I am going to be close, but you can’t back down. Not against a guy like that,” Enders said. “He wants to kick my butt just as badly as I want to kick his, I can assure you that. This stems back to the beginning of my career when he made that comment that he didn’t want to be the first guy to lose to a girl. I think I have earned my stripes and I am not looked at any differently now.

“To go toe-to-toe with the best in the business like that is really awesome.” 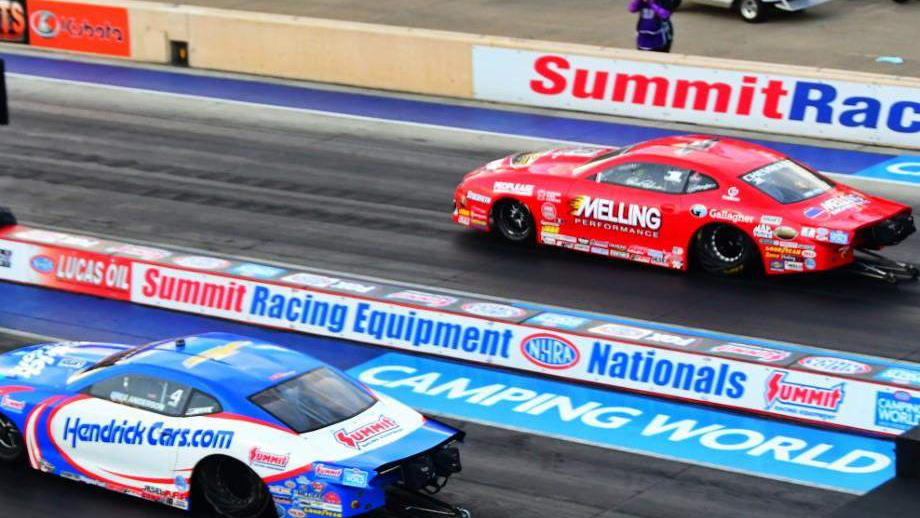 Enders had a relatively quiet weekend, by her own standards, matching up with a handful of relatively green drivers in the Pro Stock category.

She easily dispatched of Cristian Cuadra and Elite Motorsports teammate Bruno Massel in the opening rounds. She overcame a starting line disadvantage in round one with a 6.674 at 206.95 mph to defeat Cuadra to open the day, followed by a wire-to-wire win over Massel with a 6.647 at 207.34 mph before the first round of storms washed over the track.

Following a lengthy delay, Enders again had to overcome a quicker opponent at the starting line as Anderson’s KB Racing teammate Kyle Koretsky posted a .008 reaction time in his Lucas Oil Chevrolet Camaro, but Enders was able to quickly drive around him with a 6.643 to a 6.660 to collect the win.

“We have a running joke here that we win as a team and we lose as a driver,” Enders said with a laugh. “But we have a lot of fun together as a team. When their backs are against the wall, they rise to the occasion every single time. They were up there on the radio before we fired the car pumping me up so I could go up there and rip the tree. These guys work their entire lives for moments like this and this means the world to them just like it does to me.

“And to be able to park a JEGS car in the winner’s circle at a Summit race is always fun.”

Anderson, who collected his sixth pole position in seven races this season, reached his fourth final of the year, holding a 2-2 record in those matchups. On Sunday, he defeated Fernando Cuadra, Val Smeland and Matt Hartford to reach his 162 career final round.

He had low elapsed time in every round of eliminations.

For Enders, Sunday marked a turnaround for the team that has struggled since winning at Las Vegas back in April. The team had slipped from second to fifth in the Pro Stock points since that win, with Enders holding only a 4-4 round record over the past four races until her breakout win on Sunday.

“(Crew chiefs) Mark Ingersoll and Tim Freeman have fought this racecar for the past couple of months since our Vegas win, but they were able to get a handle on it today,” Enders said. “We were making significant changes with the car and they just dug deep and went after it. I am so lucky they are mine.”

After the win, Enders also took a moment to remember racer Kyle Seipel who lost his battle with cancer on June 21.

“That win was definitely for Kyle Seipel and his family,” Enders said. “What that guy did for big money bracket racing is unheard of and he fought a really great fight. We will celebrate this one in his memory for sure.”