Erica Enders earned her fifth NHRA Camping World Drag Racing Series Pro Stock world championship today at the 22nd annual NHRA Nevada Nationals at The Strip at Las Vegas Motor Speedway. The standout driver clinched the championship by winning the semifinal round of competition but that did not deter the fan-favorite driver. She went on to win the entire event, marking her tenth win of the season and surpassing her previous career best of nine event wins in one season.

Enders began the year with a renewed fire and drive to win. She proclaimed throughout the season that she was playing for keeps and would not rest until the championship was hers. That laser focus served her well as she racked up win after win in her Melling Performance/Elite Motorsports Camaro, including first-time victories at three tracks that had previously eluded her.

“As a kid with big dreams, this makes me want to pinch myself,” said Enders. “We have worked really hard to get here and we’ve sacrificed a lot. It’s nice to see all of those sacrifices paid off. It’s really unbelievable. I’m a blessed girl.

“What an incredible day,” Enders continued. “My crew chief said we were going to go for it, and I just had to drive. To qualify No. 1, win the race and win the championship, it’s been a badass day. As a personal goal, we wanted to get that 10th win and I have the best guys that stand beside me. They all make it possible for me and I’m living my dream.

“This whole season has been a dream come true for our whole team. This season, like every season, we set out to win races and win a championship and we did just that. We spent the whole season with a No. 2 on the car and that didn’t sit well with any of us. It lit a fire under our team to become champs again.” 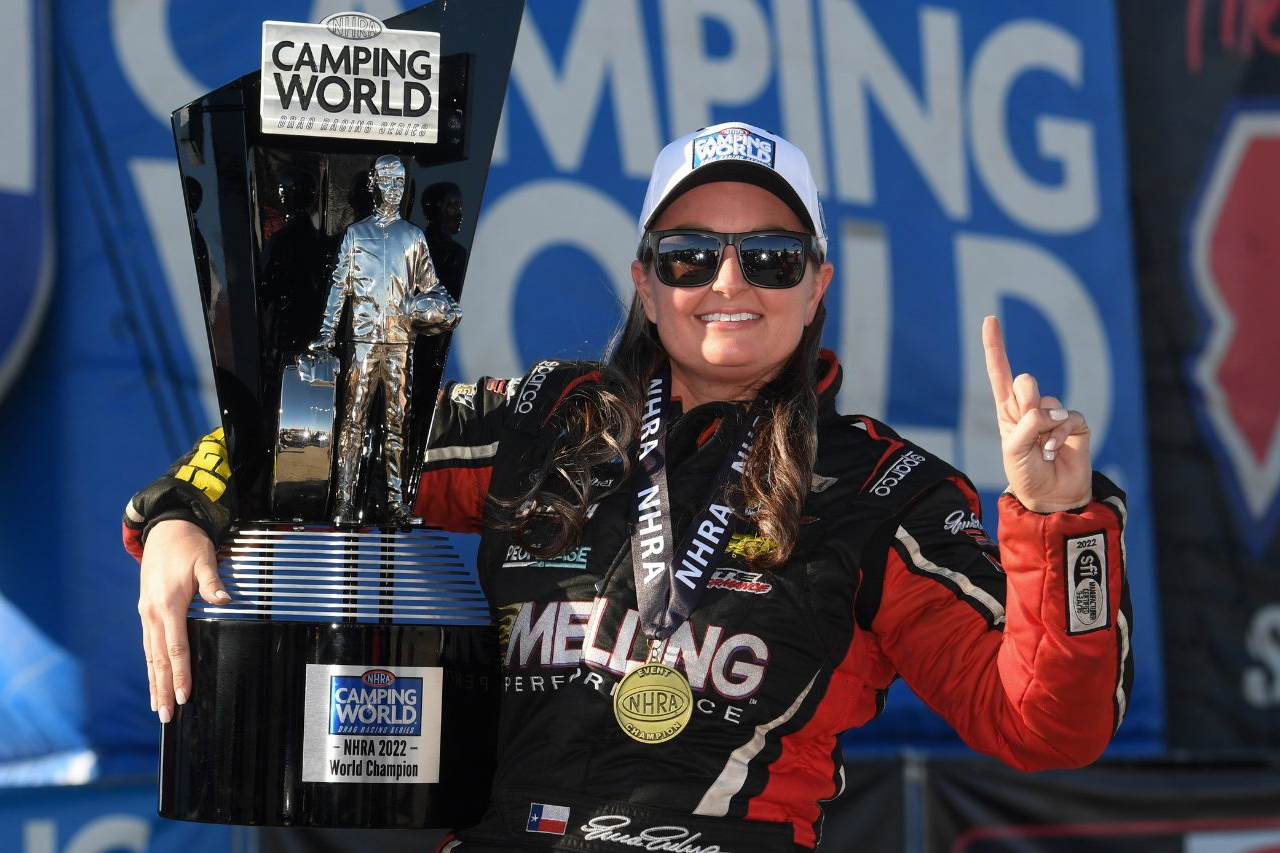 Only four other Pro Stock drivers have earned five or more world championship titles in the 71-year history of the sport. Enders shares this distinction with Jeg Coughlin, Greg Anderson, Warren Johnson and Bob Glidden. Enders took over the points lead early in the season after her third win of the year in Houston. She held onto that lead for the rest of the season.

Today’s win in Las Vegas is the 15th win for the Elite Motorsports Pro Stock team. Enders faced her teammate Troy Coughlin Jr. in the final round today to secure her ninth victory at The Strip at Las Vegas Motor Speedway. Leaving the prestigious track, Elite Motorsports holds the first (Enders), second (Coughlin), and third (Aaron Stanfield) positions in the points standings.

Enders started race day from the No. 1 qualifier position for the sixth time this season thanks to a blistering run of 6.579-seconds at 208.75 mph. 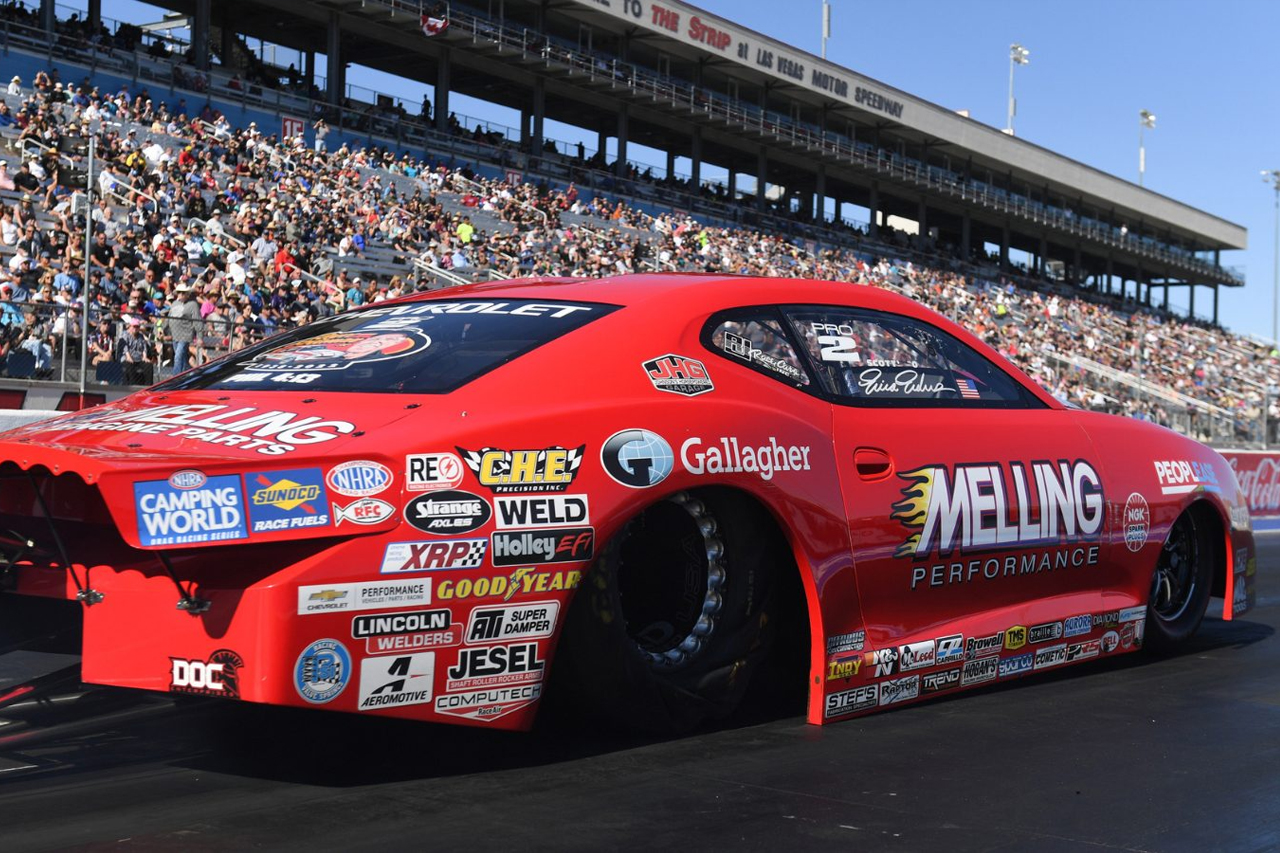 The only Elite Motorsports Pro Stock drivers to make a Round One exit were those who were facing another Elite machine in the opposite lane. Bringing back his blue Corral Boots Mustang, Fernando Cuadra Jr. defeated Bo Butner in his “Cars”-themed Johnson’s Horsepowered Garage Camaro. Aaron Stanfield took out his Elite teammate Fernando Cuadra Sr. when the Cuadra Boys patriarch cut a -.002 red light. Cristian Cuadra outpaced Matt Hartford on a holeshot while Troy Coughlin Jr. advanced his Camaro into the quarterfinal round by beating Rookie of the Year candidate Camrie Caruso. In the final pair of the first round, Enders defeated Pro Stock veteran Kenny Delco and laid down the fastest pass of the day, running a 6.604 at 207.21.

Because Stanfield lost in the second round of competition, Enders would need to advance through the semifinals and into the finals in order to clinch the championship at the penultimate event of the season.

All four of the drivers who advanced to the semifinal round of Pro Stock competition are second-generation drag racers and the anticipation was palpable as C. Cuadra and Coughlin prepared to face each other first, followed by Enders and Koretsky. By making it to the semifinal round today, C. Cuadra leapfrogged several competitors in the points standings moving from No. 12 to No. 8. Although he made a stout pass of 6.691 at 205.07, it couldn’t beat Coughlin’s 6.657 206.29. Enders defeated Koretsky to advance to yet another all-Elite final round against Coughlin.

There’s only one race left for the season and Elite Motorsports plans to continue dominating the Pro Stock field as they travel to the Auto Club NHRA Finals in Pomona, Calif.