NHRA’s Pro Stock class had not competed in a national event since Houston on April 24.

Erica Enders won that race at her hometown track in the farewell event at Houston Raceway Park and she kept her momentum going Sunday, June 5.
Enders, a four-time world champ, clocked a 6.547-second time at 211.00 mph in the final round to defeat Elite Motorsports teammate Aaron Stanfield who came in at 6.553 seconds at 212.13 mph.

“I mean any weekend we can stick two Elite Motorsports, Elite Performance cars in the finals is just epic and awesome,” Enders said. “But yeah, you mentioned Aaron won here last year. We won in '17 coming off a win-less season in ‘16 prior to that was two back-to-back world championships. So, being able to win here and Epping in 2017, kind of turned the tides for us and then parking Aaron's car in the winner circle last year was significant, but to go up there and know what each of us has under the hood and what each of us are capable of behind the wheel is pretty awesome. But I love it. I'm so proud of my team.”

This was Enders' 37th career Pro Stock national event win. She has now won three races in a row as she captured the title at the Four Wide Nationals at the Strip at Las Vegas Motor Speedway, April 3.

“We were talking about it at the top end,” Enders said. “In 2015, we had a tremendous year, a season winning nine of 11 finals and just claiming the championship in Vegas before the year was even over. And then this year we're off to an even better start than we were in 2015. So, I know as well as anybody that there are way more valleys than there are peaks, but we're going to enjoy the ride while it lasts and just try to capitalize on every single moment.

“I mean, they all matter and I try to gather it all in as much as I can because you just never know when it's going to be your last and I never know when I'm going to be done. It's a dream come true for me to be here as a little kid, as a junior drag racer, just with big dreams to be on the stage with these professional drag racers one day and we're getting to do it. So, it's pretty awesome.” 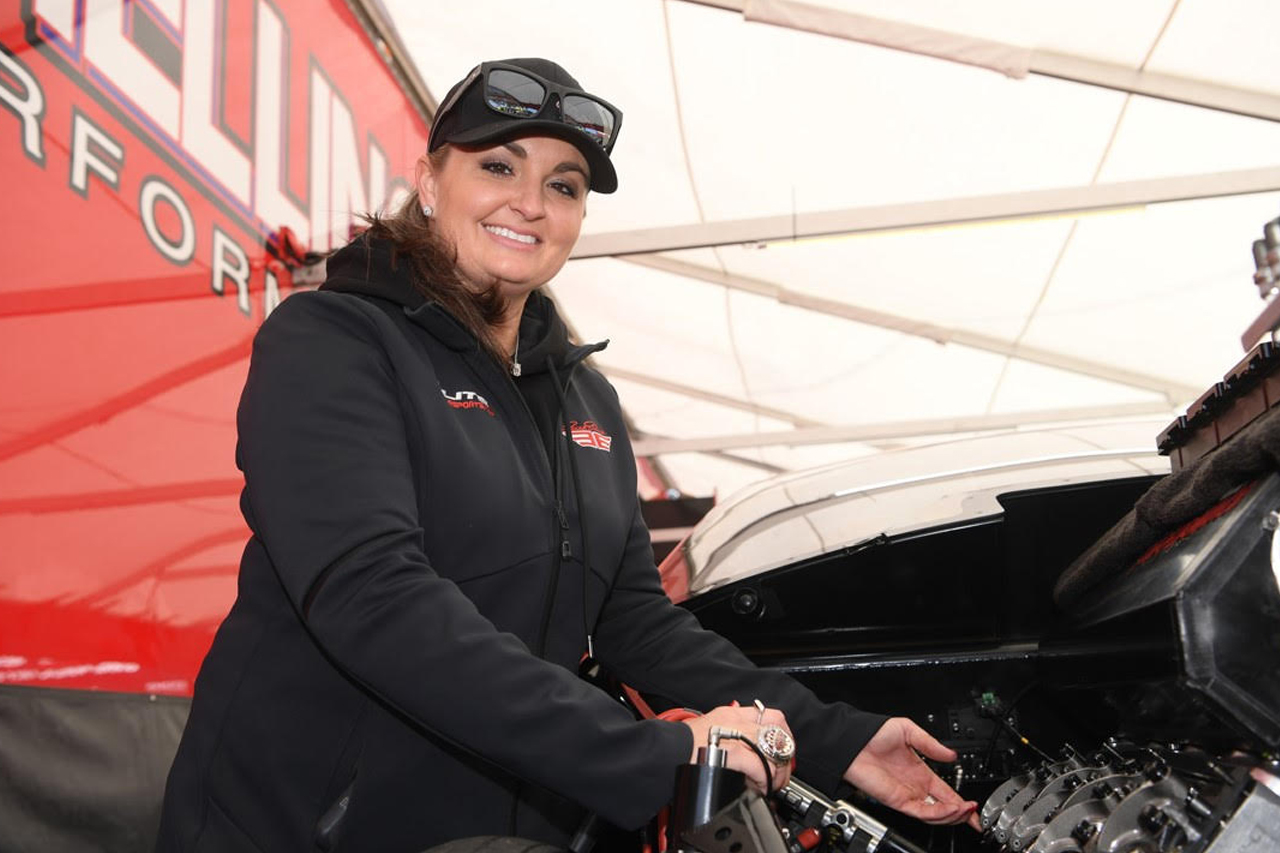 “That's the stuff that I miss out on being in the car is that the way that the fans react and the way that my team reacts on the starting line, but we call this Pro Stock country,” Enders said. “Englishtown, N.J., Epping, New Hampshire, Reading, Pa., just back East. They tend to love the naturally aspirated factory hot rods. And it's a unique place to come. The cars usually run pretty well, especially if there's cool, dry air it's conducive for record-setting runs. And they've done that at all those tracks.

“So, I love racing in this part of the country. So, to see the fans reception for our class when nitro kind of takes the lead because they explode and crash and blow up and hit things. And we just kind of go straight down the racetrack, but it's so intricate and it's so precise. I wish that people could see what goes on behind the scenes. It makes Pro Stock what Pro Stock is, but long answer to your question, we love racing in this part of the world and I'm thankful that we're finally back.”

Enders is first in the points standings – a whopping 108 points in front of second place Stanfield.

“I guess, I mean, we kind of have keyed it ‘Drive for 5,’” Enders said. “It's just our effort for our fifth title and I talk about it when I'm asked this question. So, if you've heard this answer before, excuse me. But the fashion that we lost in last year was pretty gut wrenching. And Greg (Anderson) had a dominant car all year. He should have wrapped the championship up way sooner and whatnot, but things didn't fall that way. He couldn't get that monkey off his back for that win to top WJ (Warren Johnson). All that history making that happened for him was just awesome. Last year was just his year, but the fashion in which we lost to him kind of gave us that extra edge to go to work.” 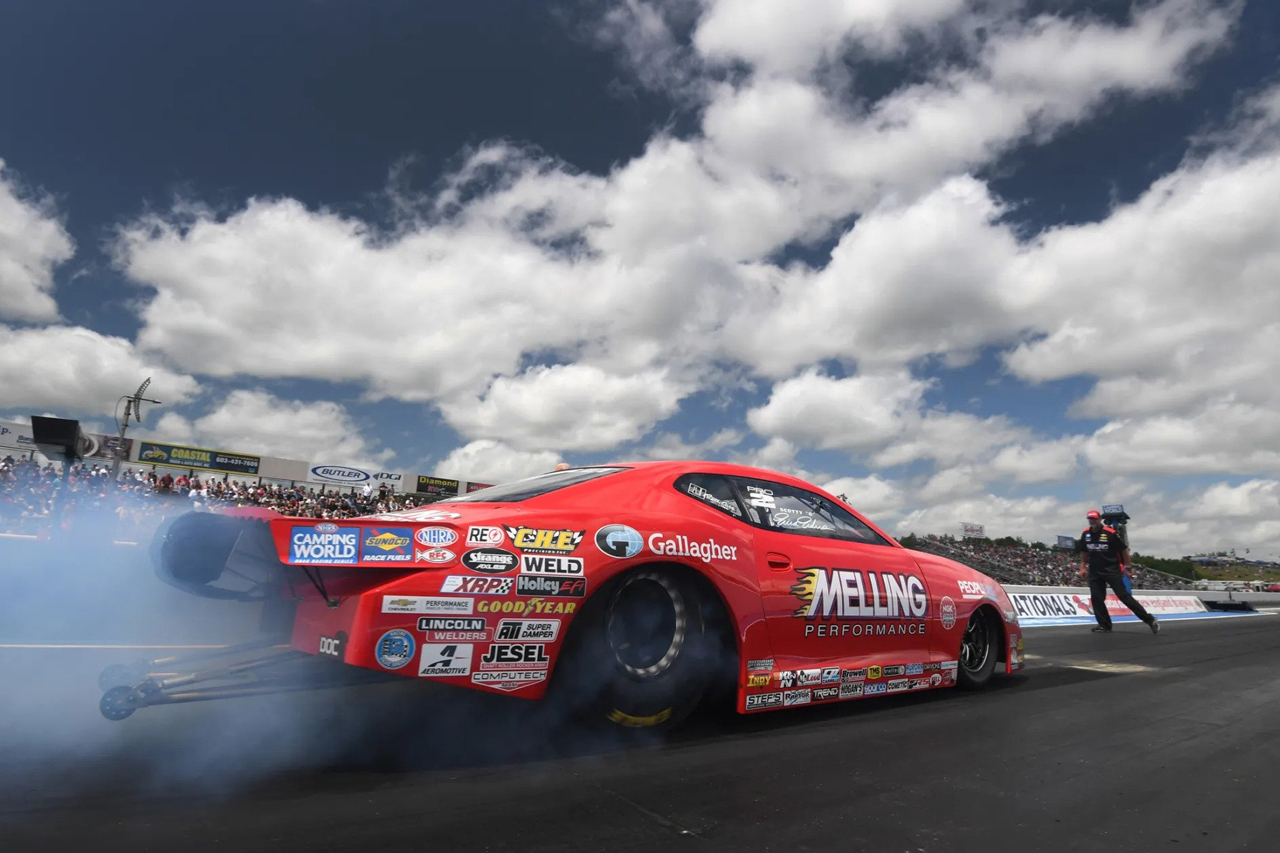 “I had reconstructive surgery on my elbow in the offseason,” Enders said. “I didn't even know if I was going to be able to drive in February. And thankfully my doctor released me, and we were able to start the season off on the right foot. Again, you never know how things are going to go, but we'll continue to ride the wave. I'm thankful to my team and for Richard Freeman for giving us the best equipment that money can buy. We don't want our need for anything from our rigs to our race cars, to the parts in the trailer, to our shop facility in Oklahoma, it's state of the art. And I'm a blessed girl to get to drive that race car.”

As for race day, Enders addressed her crazy second round.

“Yeah, the whole deal for second round was interesting with Greg going 227 mph next to me and a 51, which is not the case, because he would've had to put two hundredths of a second on us from a thousand foot to 1320,” Enders said. “It's just, it's literally not possible. So, those numbers in our matchup were completely wrong and then they were wrong against Mason and Kyle (Koretsky). But the video footage obviously showed Mason winning. I don't ever care who it is. All we really care about is lane choice and this racetrack, the facility has done a great job. The lanes are pretty equal, one pulled a little bit differently and it didn't necessarily show that on our data, but on that physical track reader it did. So, we could win out of the bad lane today.

“I go out there and I clutch it. I knew I was good on the tree. I go to pull second gear and it just blows the back window out of it. Because we're racing, I pull second gear and I try to force it and it sometimes it'll settle down and go on. This was not one of those cases and I pulled it just blew, it blew the tire off uncontrollably. And I look over and I don't see Mason because when you're doing all that you're scrubbing ET obviously. He should have been out in front of me, and I look over, I don't see him. So, I just paddle it and grab third gear. And then my guys came on the radio and told me that he red lit. So, I'm paying attention to my car, trying to shift, not push the clutch in to abort the run. I know that's a lot of information, but I never looked at the scoreboard to see that he red lit against me. My guys told me in my radio and inadvertently we fried a clutch unit, but we had a backup for the final round. But that round was crazy for sure.”

Tire shaking in a Pro Stock car is quite the adventure, according to Enders.

“It's definitely really rough,” Enders said. “Having TJ Coughlin as my teammate now he's able to tell us he's experienced tire shake in a Top Fuel car, which obviously is nothing like a Pro Stock car, but it is very grueling. It's really hard on your body. Tomorrow I'll have knots in my shoulders. Just to give you some perspective, the radio in the carrier on the side was out of it and flung out my sunglasses case. There's just, whatever's not completely bolted down. Even my bell housing bolts were rattled loose. So, it's pretty significant shake that your body goes through and then that the car goes through. So, the guys go over everything, make sure everything's still tight and together and not broken.”

Enders her team keep its momentum going in the upcoming busy schedule.

“I mean, momentum is huge in our game,” Enders said. “The five-week gap for Pro Stock was a little interesting. The guys obviously were hard at work every single day in the race shop and in the engine shop, we raced two divisionals in our off time, Great Bend, Kan., and Dallas was a doubleheader. So, we didn't by any means to take off racing and there was some testing done by Bo Butner and TJ Coughlin.

“So, there's never any real offseason, you know that, but glad to be back, I think we're going to have what six races or in eight weeks or something pretty significant. So, we're ready to get on a roll, carry the momentum. It's just important that we keep going rounds, keep parking these Elite Motorsports cars in the winner’s circle.