This one – claimed on Sunday during the NHRA Finals at Auto Club Raceway at Pomona – was special, both in how Enders succeeded on this day in eliminations, and how the champ and her team have battled back from adversity the last three seasons.

In the end, Enders triumphed in a possible career-defining performance on Sunday against Greg Anderson, clinching a third championship at the Countdown to the Championship finale with her quarterfinal win over Chris McGaha.

On the top end and the championship official, Enders took a minute to pause in her Melling Performance/Elite Motorsports Chevrolet Camaro. She gathered herself, exhaled and then the celebration was on.

“This one means a lot because of the valleys we’ve been through. It was a challenge for us and I’m thrilled. It’s just an awesome feeling to be back on top, and it’s the reason why you never give up,” Enders said.

“Today ended up being a great day with us locking up our third championship and my teammate, Jeg Coughlin, winning the race and solidifying the second position. For everyone at Elite Motorsports to take home the top two positions in NHRA Pro Stock, it’s a huge thrill for us. We take a lot of pride in what we do and it paid off this year. I’m just really proud.”

It’s been a thrilling dynamic, especially as Enders and the team, led by crew chiefs Rick Jones and Mark Ingersoll, have turned it on during the playoffs. 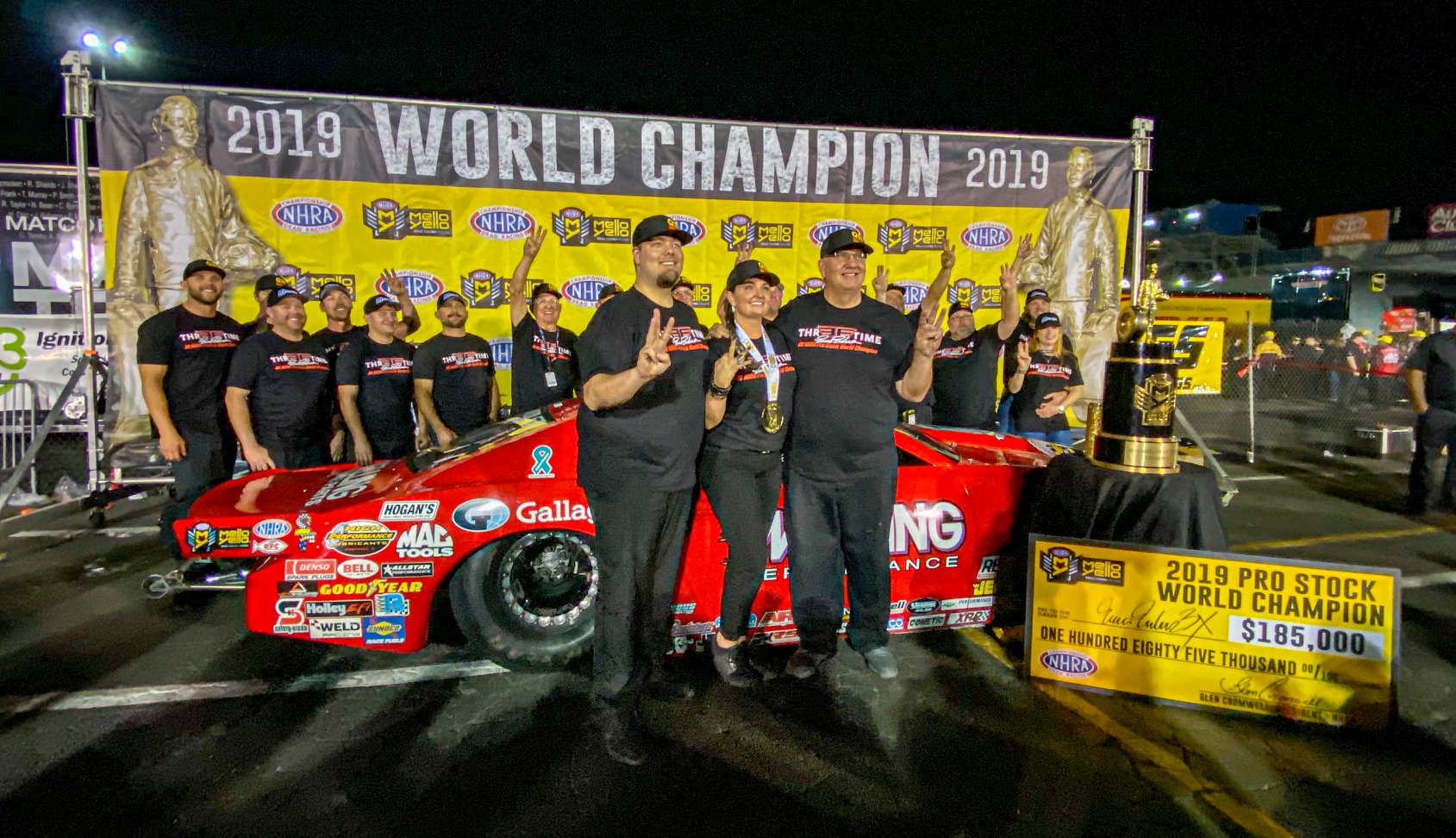 Things got really interesting in qualifying as Enders claimed the second spot for the third straight race – after three straight No.1 qualifiers to open the Countdown – with a run of 6.538-seconds at 210.93 mph.

Anderson, though, deliberately tried to qualify No. 15 to line up opposite her and keep his teammates in the title hunt. Enders welcomed the challenge, sending a stern message on Saturday following qualifying.

She stayed locked in leading up to the epic matchup, one that had Auto Club Raceway at Pomona buzzing. The match-up for the ages delivered, as Enders went .017 off the starting line, going 6.570 at 210.41 to slip past Anderson in a scintillating side-by-side duel.

Enders answered the call, setting off an emotional and pointed celebration on the starting line by her team. She followed suit on the top end and the massive victory is one she’ll remember for a while.

“It was the race of the year for me, so I couldn’t be more proud,” Enders said. “I found it bit interesting, but it is what it is. I’ve said it before that I would rather race someone like him first round. We went out there and they gave us all they had, and today it ended in our favor. It was a great drag race.”

Enders then delivered the championship blow a round later, beating McGaha on a holeshot thanks to her .019 reaction time and a run of 6.597 at 209.69. It meant another celebration, hoisting the massive world championship trophy above her head and the culmination of an immense amount of work. 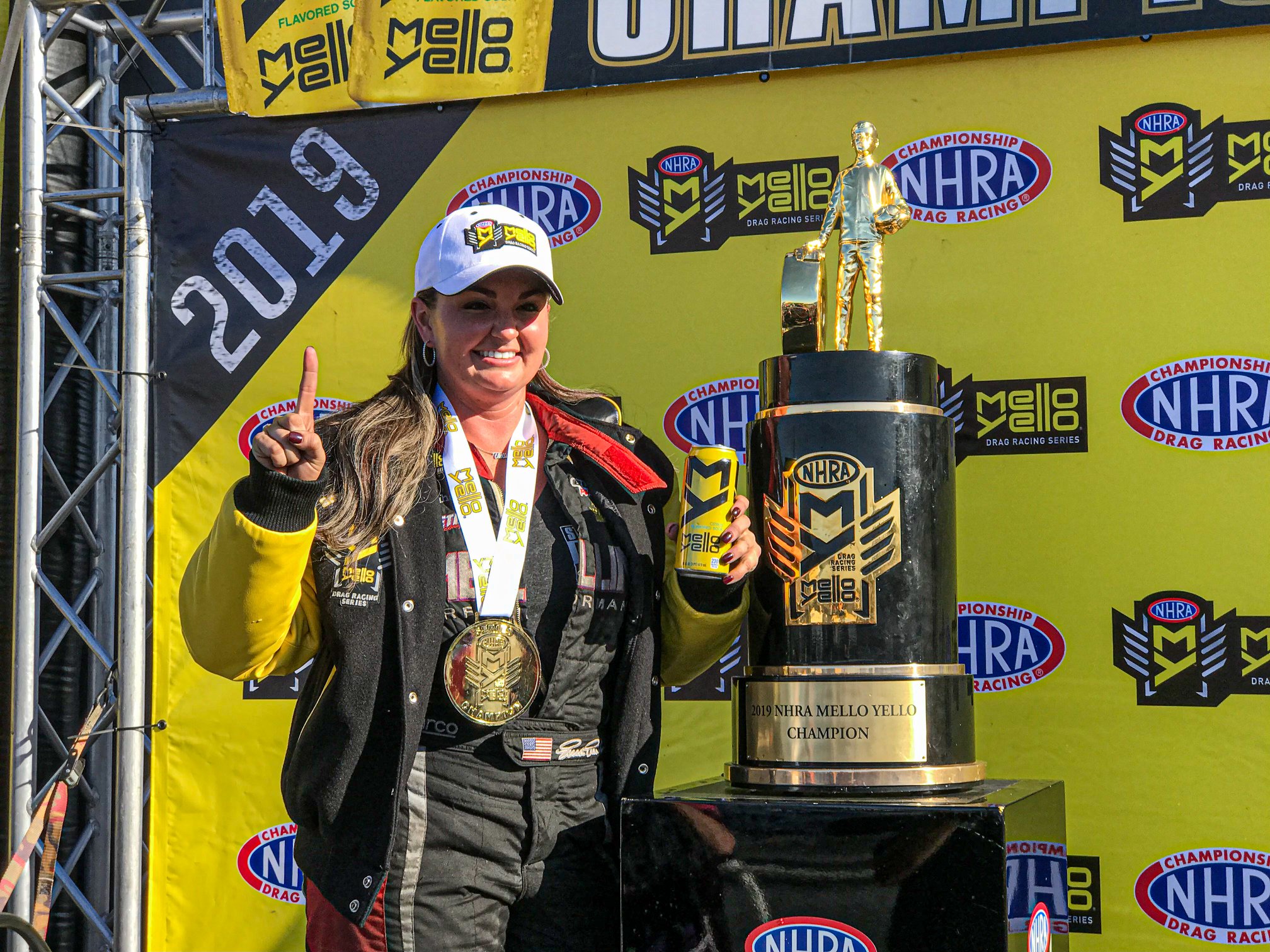 “Going against Chris in the second round, it’s two of my favorite guys to beat in the same day (in Anderson and McGaha), so I was just thrilled for our entire organization,” Enders said. “What an honor.”

By claiming a third world championship, Enders joins Angelle Sampey and Shirley Muldowney as the only females in NHRA history to win three world titles, while she also becomes the lowest-seeded driver to win a championship in Pro Stock after starting the playoffs in fifth.

Enders, though, was dynamite when it counted, winning twice in the Countdown (St. Louis and Las Vegas), qualifying well and putting together a string of consistent performances.

She ends the year with two wins and five finals appearances, giving Enders 25 career wins – with the Vegas win giving females the 150th overall in NHRA Mello Yello Drag Racing Series history – and 51 finals berths. The championship also gave Enders a chance to reflect on the wild ride she’s been on to get back to this point.

“To give your whole life to something, it’s been a really long road and it hasn’t been easy at all,” Enders said. “You persevere and you just never give up.

“It’s very challenging to be a part of it, but I love what I do and I love the guys that I get to do it with. I’m honored to be a three-time world champion and represent a sport I love and that I’m so passionate about. For all my guys that sacrifice time with their kids and wives, it means the world to me. I’m glad we did this together as a family.” 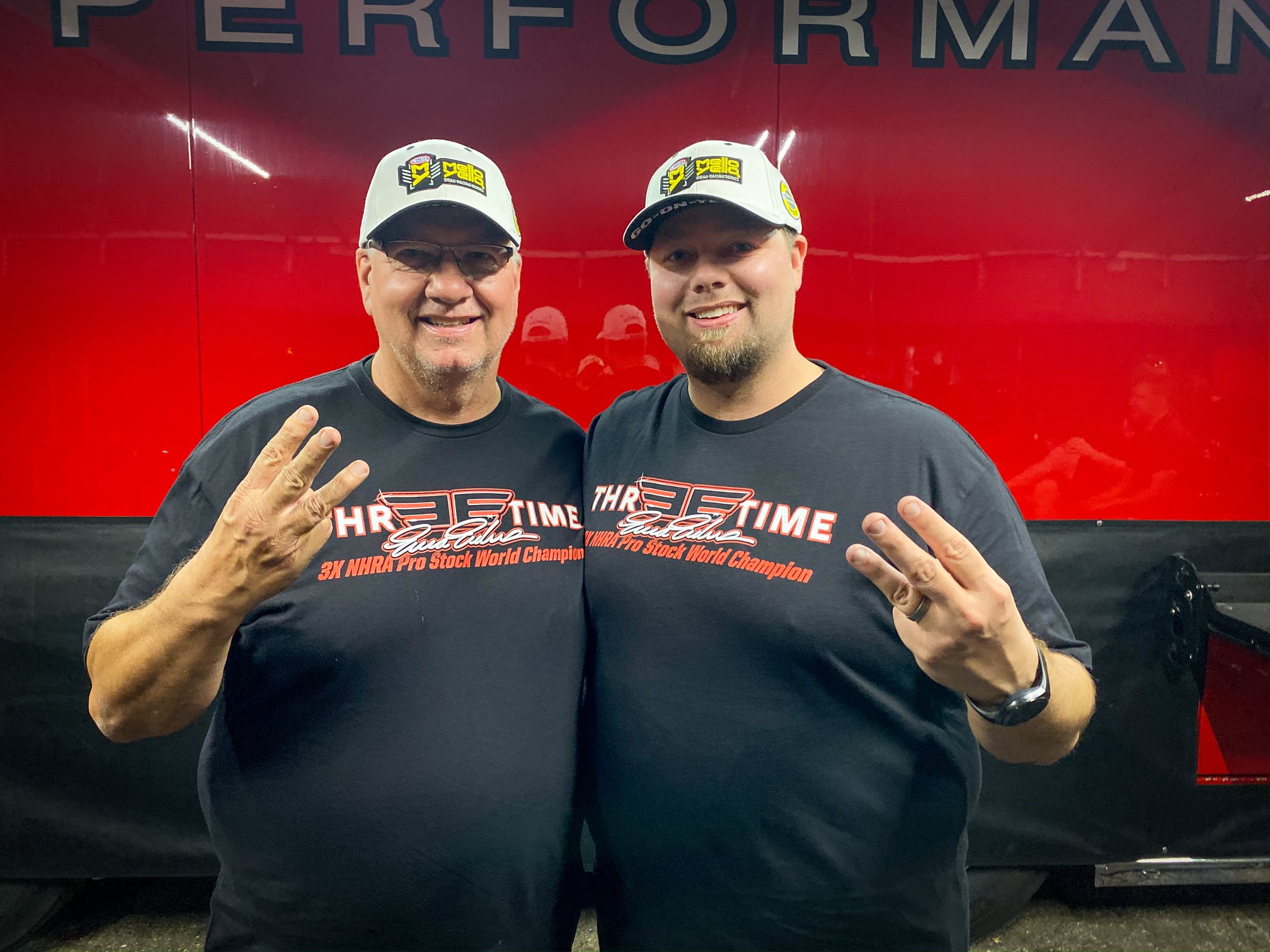 Rickie Jones - "It was very exciting to finish the season strong with Erica and Jeg finishing #1 and #2 in the world. Competing at this level and sharing these moments together with my Dad has been very special. I will certainly cherish these moments forever."

"A big thank you to long-time friend and car owner Mark Stockseth for all of your support and always believing in us. Thank you to Richard Freeman and the whole Elite team for never giving up and having our backs through the ups and downs, and all the hard work and dedication it takes to make this happen. Thank you Erica for being a badass in the driver's seat!"

"Thank you to our entire staff at RJ Race Cars & Quarter-Max for providing the best quality parts and service to all of our customers, you guys are the best! Thank you to my wife Sarah for supporting our family while we are on the road, you are amazing. It feels great to bring this one home for everyone, we are truly blessed."